If you ask me how it happened, I’d tell you I didn’t know.  If you asked Richard, he’d say in a lightly mocking tone “It’s just a piece of turkey and she looks so huuuunnnggggrrrrryyyyyy”. If you asked Bri she’d chime in with “you’re a sucker for animals!”.

I’ve always been a dog person. People say I speak dog.  Fluent in canis familiaris. Dogs are drawn to me, me to them and I’m able to work with some no one else can.  Its just been that way forever, And while I didn’t dislike cats, I didn’t go out of my way to seek them out either.

Until Pandora. So named because I just had to open that box, didn’t I?

It was our first year in Virginia and we lived in a rural area near Richmond.  Richard’s parents live out on the eastern shore and we’d gone to visit for Thanksgiving. In typical mom fashion, we were sent home with ziplock containers full of roasted yams and mashed potatoes and green bean casserole. And turkey. You can’t forget the turkey.  It began snowing in Virginia Beach, and by the time we passed Norfolk it was looking like a real storm.  And hour later into the drive back there was already two inches on the ground and more coming down hard.

When we finally got home, at least 8 inches blanketed the ground.  Our home, set back into the tree line, often saw woodland visitors make up close and personal appearances.   Raccoons who always seemed to know when I was frying chicken were frequent fliers on our long wide porch. Deer grazed in the yard. And feral cats stopped by to see what was for lunch.  Two in particular were around most- a glossy black tom we referred to as “Leroy” (Bri was big into Disney’s “Leroy & Stitch” at the time)   and a stunning tortoise shell calico.  Trudging through the snow to our door we could tell they’d all been around that evening. The calico still was.

Curled on our porch out of the worst of the weather she seemed like she was waiting.   We made multiple trips to get everything into the house and she was  there, watching, blinking, in what my buddy Max would call “standard meatloaf position” for warmth.  We kept looking out and she was still there.  We determined she looked hungry but since we didn’t own a cat, we had no cat food.

We had turkey though.    And so I ventured out to the porch, moist meaty offering in hand, and made a new friend.   The walked to the door after being fed and gently pawed it. We allowed her inside. She walked calmly around, settled in for a nap for a bit on the couch, walked about some more meeting the dogs then quietly padded back to the door, giving a soft “mew”, until we let her out again.

This became routine and she was christened Pandora. It would have stayed this way too until we realized she was getting rather round about the middle.  We had assumed the notched ear was a sign she’d been through the local TNR program- a program we participated in, too.  We were wrong. When it become apparent that this friendly feral was going to soon be an unwed mother, we gave her a space in the kitchen to stay warm and safe from predators.  She delivered five adorable balls of cuteness in late February, though she chose a dim corner or Bri’s room under her desk to do it.   We kept cat and kits indoors for a while for their protection, then Richard built a kitty enclosure outdoors where nothing could get to them.  Our sweet Brooklyn loved them and never missed an opportunity to swipe a baby or two to snuggle and love on until momma cat threw a real live hissy fit demanding their return. Eventually, the kits- all girls- were spayed and mom too, with all ears properly clipped under sedation to mark them as altered.  Much friendlier now, and used to daily human interaction, we found homes for momma (happily enjoying the good life with my mother and father in law on the shore!) and three of the kits.   Penny and Whiskers (aka Whiskey) stayed on.  We tried without success to ever trap Leroy for a snip, but we kept another generation of girls from producing more cats than the local colony could handle.  On the day we relocated to the New River Valley, Leroy glared at us from the driveway, long thick tail sweeping from side to side, eyes narrowing in his scarred face. He never liked us much but enjoyed the food.  This reinforced my belief that cats were not the greatest. But Richard and Bri were in love with the two kittens in their laps. What could I do? 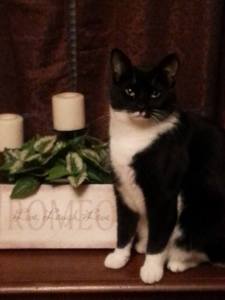 Skipping ahead a bit, Bri comes homes in tears one afternoon from school. Seems her teacher had found a stray cat, quite friendly, declawed, and couldn’t keep her. She’d taken her to the vet for a check up and shots but since her apartment didn’t permit pets, the cat couldn’t stay and had to be gone by the end of the week. She ever so thoughtfully turned to her impressionable group of middle schoolers and asked them to ask their parents if they could have a cat.   Miss Manipulative, the teacher, had spoken of a sad, tragic place called The Pound, where animals go in and never come out.   This instigated a long, serious talk with my daughter about the responsibilities of pet ownership, and in the end, my little girl’s sense of compassion won the day and Katniss came to stay with us too.   Penny and Whiskey were unimpressed.  I had the first twinges of concern that I was leaning towards becoming a CCL.

A visit to the vet with a sick puppy brought Salem into our lives. As I sat there and listened to this idiotic wretch go on and on about all the reasons she just couldn’t keep her cat after ten years- TEN YEARS- of ownership and he had to go RIGHT NOW and she couldn’t even wait another day for a shelter to open…and being a volunteer with my Akita breed’s Save Our Seniors and knowing first hand the dismal rates of adoption for old pets- I stepped up and said four words in a chilling tone meant to brook no disobedience. Give. Me. The. Cat.   Long story short (I’ll share his tale on another blog), Salem become cat #4.  I said we were done. I lied.

A kennel club meeting one evening in the park and…yeah you know where this is going. Soft ,warm,  no  more than 6 weeks old kitten tucked into my jacket and headed home. The others left with her found homes with my fellow club members. We must all suffer from the same form of Suckeritis.  Echo joined our crew and with a grand total of five, I resigned myself to the title. I’d become a cat lady.  Adding crazy to the front is an honorific earned once you get past four; and just kind of comes with the territory.

As I type, Salem  has crawled across the furniture and deposited himself on the narrow space between my waist and thighs not already occupied by my HP laptop.   He’s purring like mad- he’s a real talker- and either doesn’t know or doesn’t care that I’m trying to accomplish something here. I suspect the latter.

Life had become a series of picking things up that the cats toss off shelves and dressers, crockpots full of fish or rabbit to cook down into easy to digest meals for the senior, morning removal of a living hat on my pillow and playing guessing games as to which is responsible when I hear a crash in the other room. It’s also full of the contented sounds of a happy feline who knows he is safe and sound in my arms, laughing along to the mid evening marathon, loads of “awwwww” moments when the dogs and cats join in social grooming sessions, and realizing the thing that used to be up a tree or down a hole in my yard now lying motionless on my porch was a treasured gift from an independent creature who wanted me to know they like having me in their life, too.